Maak, the UK’s leading auction house devoted to ceramics, is delighted to present their 2019 Spring Sale. The auction will include over 200 lots for sale, presenting fine examples by the leading names in studio ceramics, available to view from Monday 29 April at Royal Opera Arcade Gallery. The auction is to include a single collection of works gathered by the artist and gallerist George Kyriacou, that has focused on a fascination with the dialogue between contemporary ceramicists, ancient oriental ceramics and classical antiquities. Alongside the sale, Maak will present a small survey exhibition, Dialogues in Clay, to portray the unique approach that informed George Kyriacou’s collecting, bringing works from the sale into context with examples of the ancient artworks with which they resonate.

Highlights within the Maak 2019 Spring Sale include works by the 20th century masters Bernard Leach and Shoji Hamada; an extensive collection by Lucie Rie including several groups of her renowned buttons, as well as some fine vessels by Hans Coper. Also on offer will be an important Vessel with Collar by Elizabeth Fritsch; an early asymmetric vessel by 2018 Loewe Crafts Prize winner, Jennifer Lee; a fine selection of vessels by John Ward; a collection of early celadon wares by Edmund de Waal.

The auction offers a unique opportunity afforded by the sale of a single collection built up over the last 50 years by sculptor and collector, George Kyriacou. In total, Maak will include for sale 50 or so key pieces from his collection, which includes several by Janet Leach, Katharine Pleydell-Bouverie, Lucie Rie, Ian Godfrey and some important examples by Gabriele Koch.

To portray Kyriacou’s fascinating approach to the formation of his collection over the last 40 years and as part of Maak’s dedication to providing a platform for the continued understanding and appreciation for studio ceramics, Maak will present Dialogues in Clayalongside the sale.

Kyriacou’s passion for ceramics stemmed from a belief that ‘pottery is the mother of all the visual arts and relates most closely the culturalization of humanity.’ As a collector and maker, Kyriacou was drawn to the dialogue between 20th century ceramicists and their ancient forebears, and this communication, both direct and indirect, between artists throughout the ages underpinned his collecting across time periods. For further information on the exhibition please see attached release.

Maak continues to champion the connoisseurship and collecting of modern and contemporary studio pottery. Through their continued selection of only top quality studio ceramics in the auction, this curated exhibition further emphasizes the importance of ceramics through the ages.

Sculptor and collector George Kyriacou is a Greek Cypriot who lives between London and Cyprus. Having returned to Cyprus after a scholarship at Chelsea School of Art in 1961-64, Kyriacou returned to London in 1976 following the Turkish invasion of Cyprus. Together with his wife Ritsa he opened Gallery K in Hampstead in 1990. The gallery blossomed and hosted mainly contemporary Greek art but also solo presentations of potters such as Gabriele Koch.

Maak contemporary ceramics is a specialist auctioneer and art consultancy that is dedicated to ceramic art of the 20th  and 21st centuries. Maak was established in 2008 by Marijke Varrall-Jones, former Head of Contemporary Ceramics at Bonhams. They hold two auctions a year which are conscientiously curated to offer works by a broad selection of ceramic artists, reflecting all the major developments, with particular emphasis on British Studio Ceramics. The Maak Contemporary Ceramics auctions have become well established amongst collectors and feature fine examples by the leading names in the field, from the early traditionalist potters such as Bernard Leach to contemporary ceramic artists including Edmund de Waal. 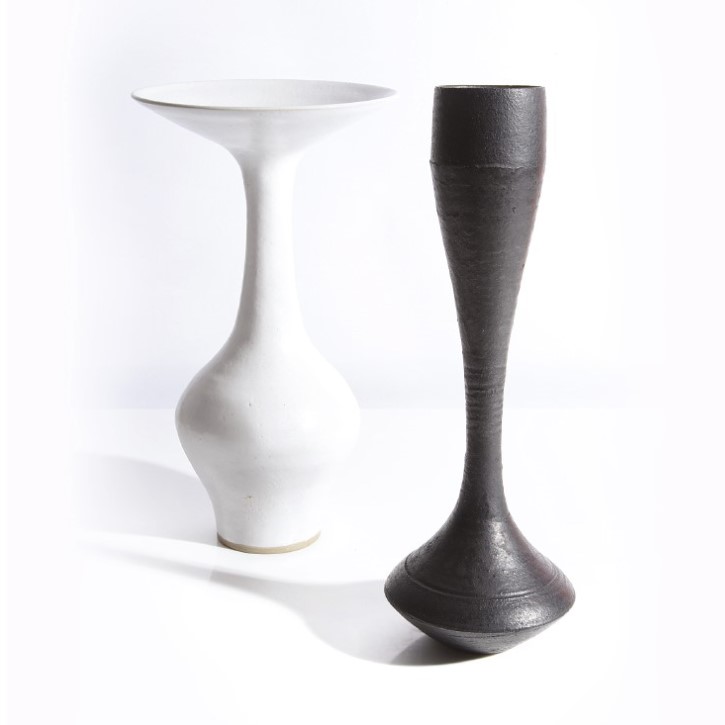